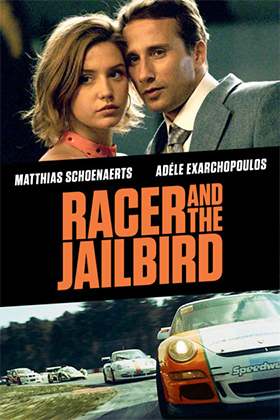 RACER AND THE JAILBIRD

First there's that title, which makes the movie sound like an American–International juvenile delinquent film from the 1950s. In the rest of the world, the third feature from Belgium's Michaël R. Roskam (Bullhead, The Drop) is known as Le Fidèle, or The Faithful.

The thing is––both titles suit the project. So would a host of other handles, considering how many genres Roskam's overstuffed effort cycles through. Heist picture, tale of star-crossed romance, prison drama, even terminal disease weeper. Roskam himself characterizes the film as "amour noir," a fitting sui generis classification for a story fundamentally about love and crime.

Our protagonists meet at a racetrack, where it's instantly obvious who is who. Bibi (Adèle Exarchopoulos, Blue is the Warmest Colour) is Racer, operating with steely precision whether behind the wheel of her Porsche or a desk at her family's automotive business. As for Gigi (regular Roskam collaborator Matthias Schoenaerts), his line about being in the car import-export business and the pink sweater draped over his shoulders aren't fooling anyone; he and his polyglot gang are pulling robberies across Europe, making him destined to be our titular Jailbird.

But before Gigi can run afoul of the law, these two crazy kids have to fall for each other. And fall they do, the potent chemistry between the leads being Racer's greatest asset. Each character is fascinated by the other's circumstances; Bibi's ambition is both endorsed and tempered by a loving father (Éric De Staercke), while Gigi is a street kid who has battled his way to a place at the table. Exarchopoulos allows Bibi's need for control to yield first to curiosity, then passion. Right now no one plays sensitive bruisers better than Schoenaerts, who excels in a sly riff on those staple Hitchcock motoring scenes in which Cary Grant finds himself utterly at the mercy of the woman in the driver's seat.

Roskam serves up each of Racer's flavors with skill, directing a racetrack sex scene and a daring highway heist with rigor and vigor. But the many dishes don't add up to a meal, the varied tastes never quite complementing each other. The frequent shifting of narrative gears ultimately leads to audience whiplash. Even Roskam's proficiency ends up working against the film; a story about two people speeding through life whose love for each other finally forces them to stand still demands a certain Wild at Heart abandon that Roskam's slick, accomplished formalism can't provide.

While the commitment of Roskam and his actors to this sprawling saga has to be admired, there's a mounting sense that it's all too much—at least until the extended closing sequence that comes tantalizingly close to sticking the landing. Two-plus hours of plot contortions and mood swings give way to a long single shot in which multiple story elements coalesce and you're almost—almost—ready to swoon into the movie's waiting arms. Credit Roskam that at the end of this bumpy ride, we even glimpse a checkered flag.

Vince Keenan is the co-managing editor of Noir City. With his wife Rosemarie Keenan, he writes the Agatha and Anthony Award-nominated Lillian Frost and Edith Head mysteries under the pen name Renee Patrick.