All past broadcasts are available on our YouTube channel.

The one and only Bob Dylan speaks in this audio clip about noir and one of noir's darkest literary inspirations, Cornell Wolrich. (2.5mins, mp3 format) »PLAY

Listen to a fabulous BBC Radio program exploring a little-known facet of noir icon Robert Mitchum — his poetry. This 30-minute program features an amazing array of interviews, including producer Stanley Rubin and FNF president Eddie Muller, as well as some astounding archival recordings of Mitchum himself. »PLAY (RealAudio)

On stage with Eddie Muller at the opening night of the January 2006 NOIR CITY, following a sold-out showing of Strangers on a Train, Farley Granger talks about working with Hitchcock in this excerpt from the interview. (RealAudio)
»PLAY "IT'S ONLY A MOVIE."

Can you help the Film Noir Foundation track down 35mm prints or elements from this "Most Wanted" list of missing noir films?

cynicism, desperate desire, and shadowy sexuality unleashed in those immediate post-war years proved hugely influential, both among industry peers in the original era, and to future generations of storytellers, both literary and cinematic” »READ

Alan Rode, senior staff writer for Filmmonthly sat down with

Film NoirFoundation president Eddie Muller in late 2005 to discuss the mission and progress of the newly-formed non-profit corporation. The “Czar of Noir” was clearly in an ebullient mood over the success of his two 2005 noir film festivals and recent events concerning the Film Noir Foundation. »READ

The Foundation posts the most interesting correspondence it receives from around the world, with an emphasis on how noir films have shaped and affected the lives of viewers. Go here to view selections from the Mailbox as well as submit your own message. 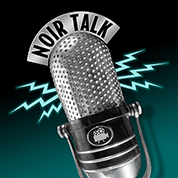 The pair also discuss a number of recent classic film noir releases on Blu-ray from specialty outlets like KL Studio Classics, Olive Films, VCI, ClassicFlix, Cohen Film Collection, Twilight Time, and Warner Archive. Flicker Alley's fully loaded dual Blu-ray/DVD editions of the FNF-funded restorations of Too Late for Tears (1949) and Woman on the Run (1950) as well as their upcoming release of our latest restoration project, The Man who Cheated Himself (1950) are included in the conversation.You can listen either on SoundCloud or on iTunes.

Museum of the Moving Image

The Blackboard - noir discussion board